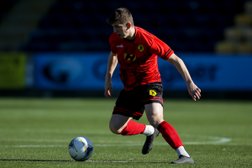 The head-to-head score between the two sides prior to Saturday’s semi-final clash sat at 1-1 for the season, but goals from Jordan Murphy, Jordan Stoddart, and Isaac Cooper made sure that Raiders came out on top when it mattered the most.

Worcester now look ahead to the all-important play-off final, where they face Hereford Pegasus, who beat Clanfield 85 4-0 in the other semi-final, with the date yet to be confirmed by the league. What we do know is the game has to be played before the start of May.

In front of a crowd of 656, Raiders began the game in positive fashion, with striker Josh Willis attempting to lob Pershore goalkeeper Eddie Cox from 30 yards out in the third, only to be denied by the crossbar.

With “everywhere we go” ringing around Sixways Stadium, Worcester maintained their early game domination into the 15th minute, as captain Logan Stoddart lifted a nice long-range free-kick into the box for Sam Carey to attack, but he was unable to keep his shot down and the ball flew over the bar.

After this, Pershore really found themselves under immense pressure from the hosts, and with half-time looming, Raiders finally opened the scoring.

The goal came in the 40th minute via Jordan Murphy, who found himself on the end of a beautiful long pass to half-volley the ball home in great style. Were there any celebrations for this goal? Just imagine how the England fans reacted to Luke Shaw’s goal in the Euro 2020 final.

Just three minutes later, while the Raiders faithful were still recovering from the first, Worcester bagged another goal. This time, it was Jordan Stoddart who was on hand at the back post to convert Jordan Murphy’s corner kick.

The first half certainly belonged to the Jordan’s. Compared to the first 45, the second half was fairly subdued, as both Worcester and Pershore were reluctant to give an inch.

However, in the 82nd minute, Joe Billingham was hacked down in the box for a penalty kick, which was smashed home by mister reliable Isaac Cooper to complete a brilliant afternoon under the beaming sun.

3-0 to Raiders, and a place in the play-off final. It’s only right that the players celebrated with the fans while singing “Raiders on fire”.

As mentioned, Worcester’s opponents in the final will be Hereford Pegasus who are a team that have beaten Raiders once already this season - a 2-1 victory last September.